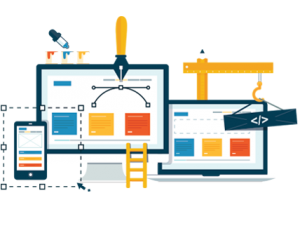 It seems that everywhere you turn today there is someone telling you how easy it is for you to build your own website. So where did this recent phenomenon of DIY websites come from? Let me bore you with some history.

It was not so long ago that if you needed a website you also needed a programmer. Probably a team. And likely an outside design company who understood the complexities of this new technology. The process could be expensive and required long lead times.

In the 90’s when websites were becoming increasingly popular the majority of the websites were built on a mark-up computer language called static HTML. Each individual page was carefully designed and hand coded. For most sites HTML code was required for each individual page. The specialized nature of this programming language also meant that once the site was created, it was not updated often unless the site owner knew HTML. Or hired professional developers who did. Which meant more costs. As a result many of the sites that were built during this time were simple designs and were often just an extension of an organization’s existing marketing materials. Website design changes also meant each individual static page needed to be updated… individually.

Then we were introduced the Visual Web Page Editor. At the root were the WYSIWYG (“What You See Is What You Get”) editors that were introduced pre worldwide web in the 1970s. Initially these HTML page editors only allowed the user to type standard HTML code but quickly evolved into something that more resembled word processing software. The user could add and edit both text and images by typing in a word processing type window. The software would then create the corresponding programming code for this information.

By using these WYSIWYG editors a user could usually switch views within the software, to see what the content would look like on a website. Users could toggle between the editor and the frontend to make changes to the content as well as the design as needed. As they evolved these editors were built with design tools to make the process quicker and less technical. Most  page editors however did still require some knowledge of basic code as well as the use of shortcodes to be most effective.

Today website builders represent the evolution of WYSIWYG page editors. These tools provide a user interface that would allow the end user to view something virtually identical to the end product at the same time that the page is being created. Builders are a direct result of the increased demand for software that allows the end user to self-publish websites rather than seeking out web programmers. And since demand = revenue this increased demand moved a lot of programming talent into this field. Which resulted in better and better mousetraps. Now we have more and more complex Website Builders that are created by web developers and are tools that allow the construction of entire websites without manual code editing. Many Builders require no coding whatsoever (not even shortcodes) and run on a simple drag and drop system that allow you to insert text, photos and videos in one easy step.

Individuals were not only looking to build their own sites but were looking for ways to manage their own ongoing content independent of programmers. This increased demand for independent content management resulted in the development of Content Management Systems (CMS) for self managed websites.

These Builders fall into two main categories – proprietary tools used by web hosting companies (hosted solutions) or software that run on any host (self hosted solutions). What is the difference? Click Here to find out more.

Q. What is the best Hosted Website Builder solution? Q. What is a blog vs. a website?

Q. How Do I Sell Stuff On My Website?